Photo by Cottonbro on Pexels.

I began this year with a small post about why I want to try to make conservation public. If you haven't read it and feel like having a look, you can do so here.

If you don't feel like reading it, which is totally legit, the gist of the article is that nobody knows who we are. Conservation is not a job, it's not something that ought to be paid for, conservators are referred to as conservationists (like Greta and David Attenborough) or, if they go by the word restorers, people think they work in restaurants. In other words, it's a bit of a PR disaster.

Turns out I'm not the only one who seems to feel this way, as I got a ton of unexpected engagement from various colleagues around the world. If you'd like to read something more official, you can look at the Institute of Conservation (UK) Chief Executive's blog here where she touches upon the same topic as she talks about the ICON strategy for the next 2o years.

So it's a thing. Maybe conservators (we) don't get out much, and we apparently don't talk as much as others about our jobs. Or at least not enough to make it into public knowledge beyond our friends and families.

Since then, I began running a Twitter and a new project called Altminster. What next?

For a good while, and given the positive feedback encountered, I considered running a Facebook page aimed at the general public. I even had the offer of a very kind and generous colleague in the States who said they would be happy to help me run the page, but that given their experiences, it would be very important to have page rules about what the page was and was not for. So I started writing those down too in a fancy Google doc.

One of the big rules for what the Facebook page would not be for was answering questions about DIY conservation.

Yeah, I thought - obviously! All trained conservators know (or at least are expected to know) it's considered unethical to give that kind of information or encouragement to amateur individuals because of the obvious potential for insane damage that can entail.

Then real life got busy, and I had to leave the Facebook idea in the backburner for a bit because Facebook is a big commitment for someone with no personal Facebook presence and a considerable social media platform to maintain as a fifth side gig.

So then, I decided to pause the big Facebook monster for a bit and make a little incursion into Reddit and see what is going on over there. It sounded like it would be Twitter-style level commitment, so why not? Facebook could wait a bit for now.

I opened an account by the same name as my Twitter one, and started trying to figure out what was going on. Reddit mystifies me. I read a bunch of blogs and articles and rules and found out Reddit is nothing like Twitter. If I have understood correctly, where Twitter can encourage people to be troll-y and mean and spammy and do intense marketing for personal projects, Reddit is the complete opposite.

Okaaaaay! That wasn't scary at all. I thought I'd continue taking a look and do my best not to break any rules. All subreddits will have different rules, you know? It's important to read them too or you might get banned.

I looked for subreddits (think of them as group forums) that involved conservation. Not very many, but they were there, and they seemed to have a fair number of trained conservators in them - not thousands (when are we ever in the thousands, eh?), but a few hundred here or there.

And one of the debates/complaints revolved around this:

This subreddit is full of random people asking for advice on how to fix their things. Bother.

And of course this doesn't happen just on the internet. I remember conferences where this topic was talked about for a while with passionate arguments on both sides.

Some arguments I have heard for and against, in and out of Reddit

Can I/we find a positive solution?

Generally speaking, I can agree with literally all of the above, both for and against. I am not criticising the above points. I do think there are very valid points on both sides of the argument, so I would like to consider a middle ground. Here are some points I am making for myself. Let me be absolutely clear that I am not targetting anyone else but me in these constructive criticisms. 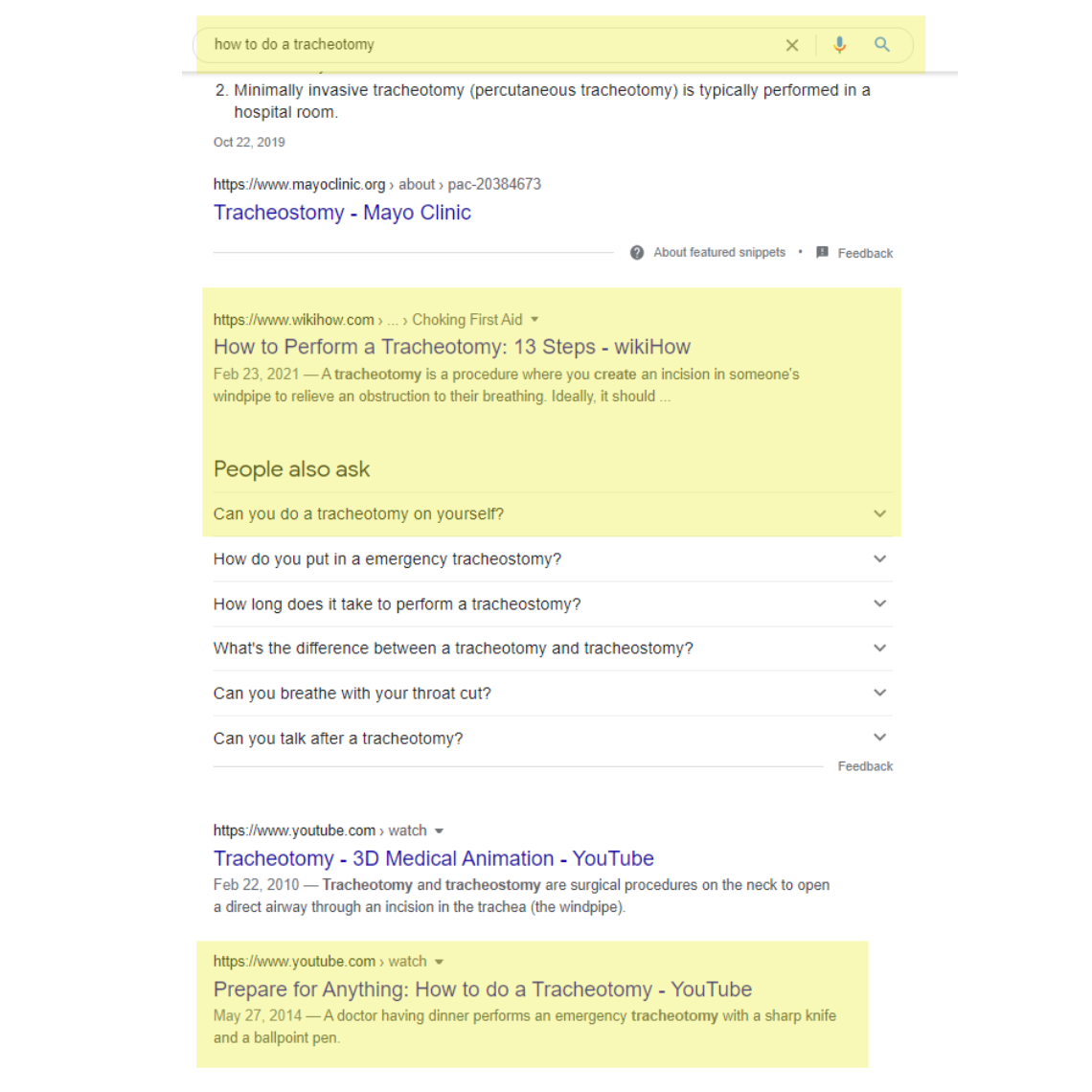 I wish I were joking. We said people wouldn't look for DIY surgical procedures online, would they?! Well, apparently they would... and they would find a WikiHow AND a YouTube video - which is animated, but as terrifying as you can imagine because you do NOT want to go trekking with someone who has watched that and thinks they will save your life by stabbing you in the neck with a pen if you choke on your trail mix.

In defense of the asker

I know DIY conservation questions may have started to feel like some sort of offensive comment for some conservators. Not all, of course. There are plenty of us who are lovely and friendly regardless of what anyone throws at us. But sometimes, it just puts us on edge, and it's understandable. We've all been there and after the 100th time, it's easy to get snappy. Let me address this the following way:

We have a phrase in Spanish that says: "La vaca no se acuerda cuando fue ternera." It literally means "The cow doesn't remember [the time when] she used to be a calf." It refers to those situations when someone who is now in a different position in life seems to forget how they used to be before they reached their current position. So here's a question for us, as professional conservators:

Remember the past - it could be recent or a looong time ago. Before you became a conservator, maybe even before you knew the profession existed, did you know non-conservators were "not supposed" to try to fix things? Did you know that there was a nuanced border of potential ethical malpractice if conservators gave you advice?

I will be honest with you. Not me! It never once, not in my wildest dreams, occur to me. Until I did my training, I had never considered that I should not try to fix something that broke in my house. Or that I should not try to clean something that was dirty. (Remember the first time they told you all dirt was not dirt?) And let's remember again, conservation has a communication problem. A lot of people don't know we are here. They don't necessarily know this is a legit job with university degrees that goes beyond being the local knick-knacker repairer person thing.

So what right do we have to be angry at them when they ask about how to fix something? Why do we expect them to know how things work? Is this common knowledge? Of course it isn't, and it's unreasonable to expect them to just know this. If anything, it's our own fault they don't know this - because we haven't communicated properly.

Let's consider this... Doesn't their question imply care? Would they even ask for advice if they didn't care how their results turned out?

How do you feel about askers now? I certainly had a rethink.

On the "amateur" condition

I was watching a documentary on fungi the other day. Never thought I'd say that, but there it is. I didn't have time to finish it, so I can't give you an overall score on it, but there was one thing someone said that stuck with me: All those 19th century men and women who went out and became the founders of every other academic discipline today? Guess what? They were amateurs. Yes, they were remarkable amateurs, but amateurs still. And many of them were shot down by the academics of their time. I'm not implying that doglover1234 asking you about the mould spots on their grandfather's painting on Reddit is the next Plenderleith in the making, but let's try to exploit an educational opportunity instead of just saying no. What if they really could have become the next Plenderleith and you just smote down their interest? Unlikely, but we can't know, I guess.

Do you want to be involved?

Basically, I'm going to try a little experiment. Maybe you will decide to join me, in which case, let me know! It'll be great if we can make a little conservation team that does not, in fact, run away from "How do I..." questions!

I will go on Reddit every now and then and look at these questions about "Oh there's a stain in this stone bust thing that my grandmother left me. Can I use stone cleaner on it?"

Whenever possible, I will respond and try to stick to the following rules:

I guess the points I will be trying to make will have to do with clarifying why we think something is complicated instead of repeatedly stating the fact that it is - which only weakens the argument over time. If I'm lucky, the person considering the DIY will re-think their choices, take some preventive measures, learn something new from a reputable source and potentially take the object to a professional - thus supporting the freelance conservation industry. If I'm not lucky, I'm not any worse off for trying - except maybe for my time, but it's a fee I'm willing to pay in this journey.

The Reddit or Facebook group or wherever answers you send are not a blog or an article or a paper that someone has to go and find. The person you are answering will read you if only because you are directly replying to them. You are 100% getting their attention - regardless of whether they decide to agree or not, do as you say or not.

That person's ultimate choice will be their own and beyond our control, but we can take each question as a little "Ask a Conservator" opportunity that someone is actively giving us without having to run a Zoom event which we then have to attempt to promote to like the ultimately 30 people who will sign up, half of whom won't even show. You know how that works.

We can't control the questions, but we can certainly improve on our answers.

May the Force be with me and with all of you who choose to join me in this endeavour.


If you liked this post, you can follow me on [Twitter](https://twitter.com/ConservaLlama) where I'll be posting more content on conservation tidbits and how to improve your collections at home.