Three-masted sailing ship made of clear, amber and turquoise blue and white glass Climbing the rigging are four sailors in dark blue glass with white heads and orange/red topped hats. The ship is standing against a lighthouse of clear glass with blue windows and a green door with an amber and light blue glass balustrade around the top. The top of the lighthouse has a white glass bulbous projection with red glass windows. The lighthouse had fallen down.

In front of the ship, there are two smaller, single-masted ships. All three ships are set over what seems to be a cotton wool sea mixed with streamers of clear cellophane. Comparative items in other collections suggest this is an original setup.

The whole is enclosed within an oval glass dome raised on a rectangular glass base supported by four bracket feet also made of glass and painted over just like the base, one of which has become completely detached.

Oral tradition says it was made in Sunderland about 1900. Similar examples found in other collections and online auctions indicate similar 1850s-1890s dates. These glass friggers would have been created as novelty pieces by Victorian glass blowers to use up the materials left over at the end of the day. They also could have been apprentice pieces. 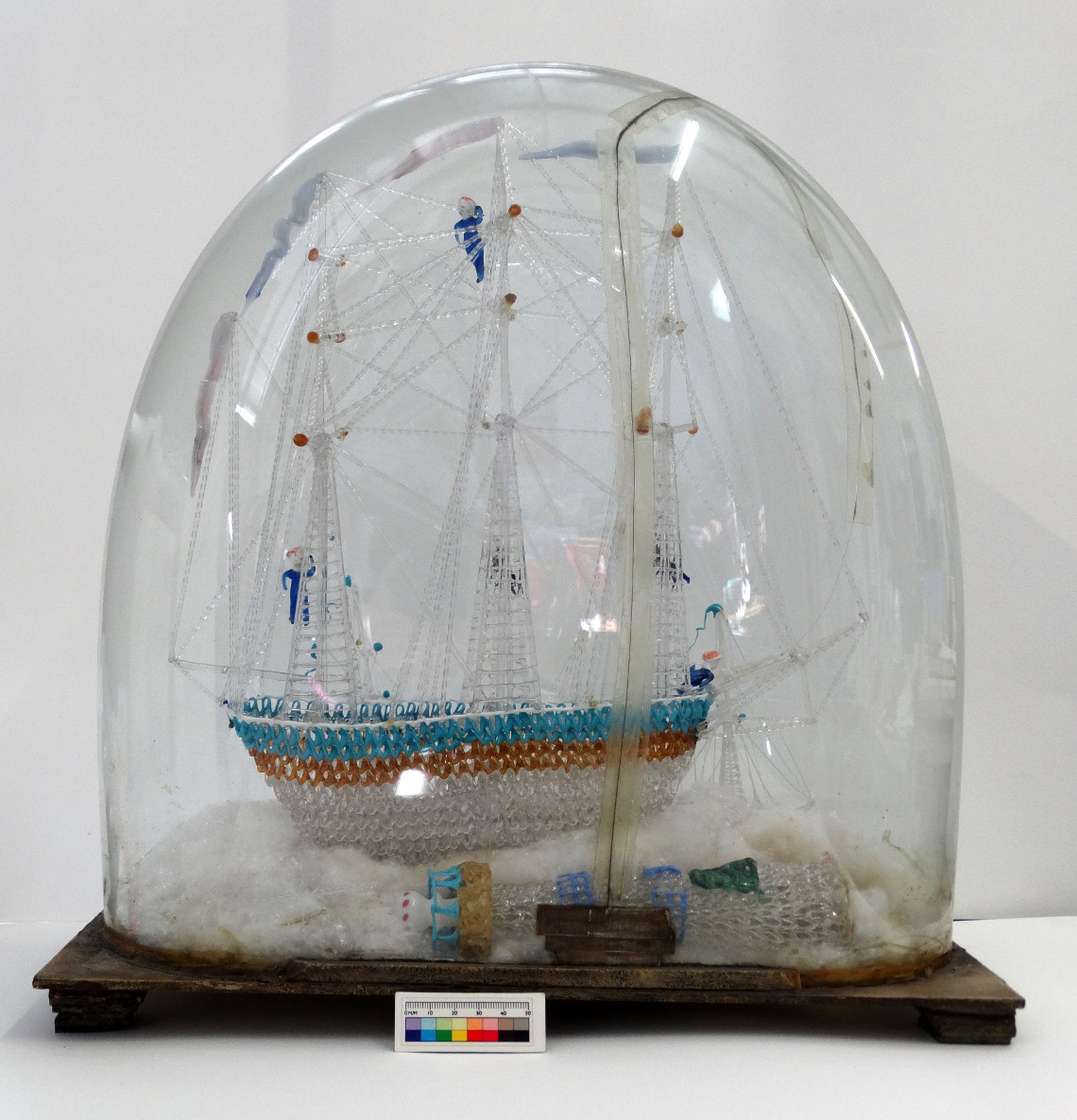 Frigger before conservation. The outside dome had been taped and the lighthouse inside had fallen over.

All broken parts had been repaired with animal glue, which yellows and browns when it dries and embrittles over time. 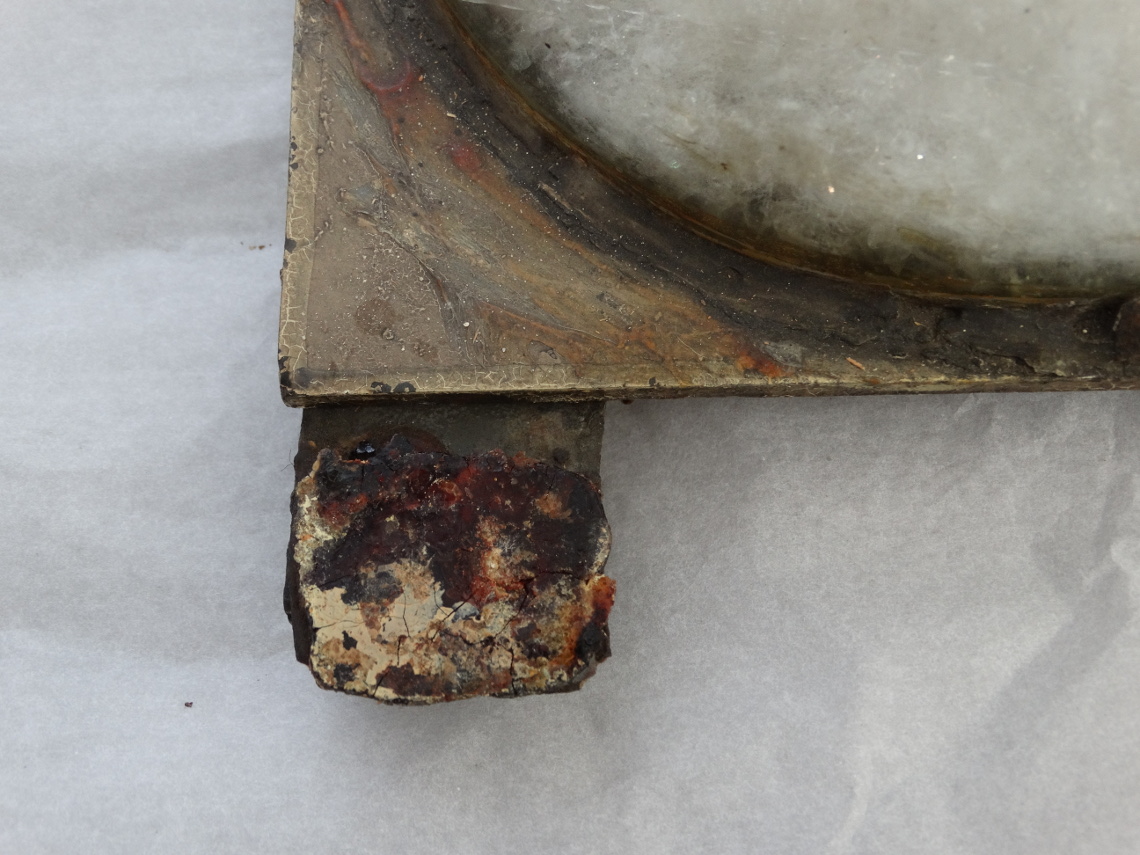 The base panel has 4 legs of what seem to be various square-cut layers of the same panel glass. One of them has become completely detached and displays evidence of hardened, darkened adhesive, and use of cardboard to make it level with the other legs.

Examination of the object with a UV torch displayed generous applications of animal glue shining fluorescently all over the object.

After conversations with Howard Coutts, ceramics curator, and consultation with Jon Old, Head of conservation, it was decided to clean the animal glue off the glass wherever possible to replace it with more stable, transparent and stronger adhesives. 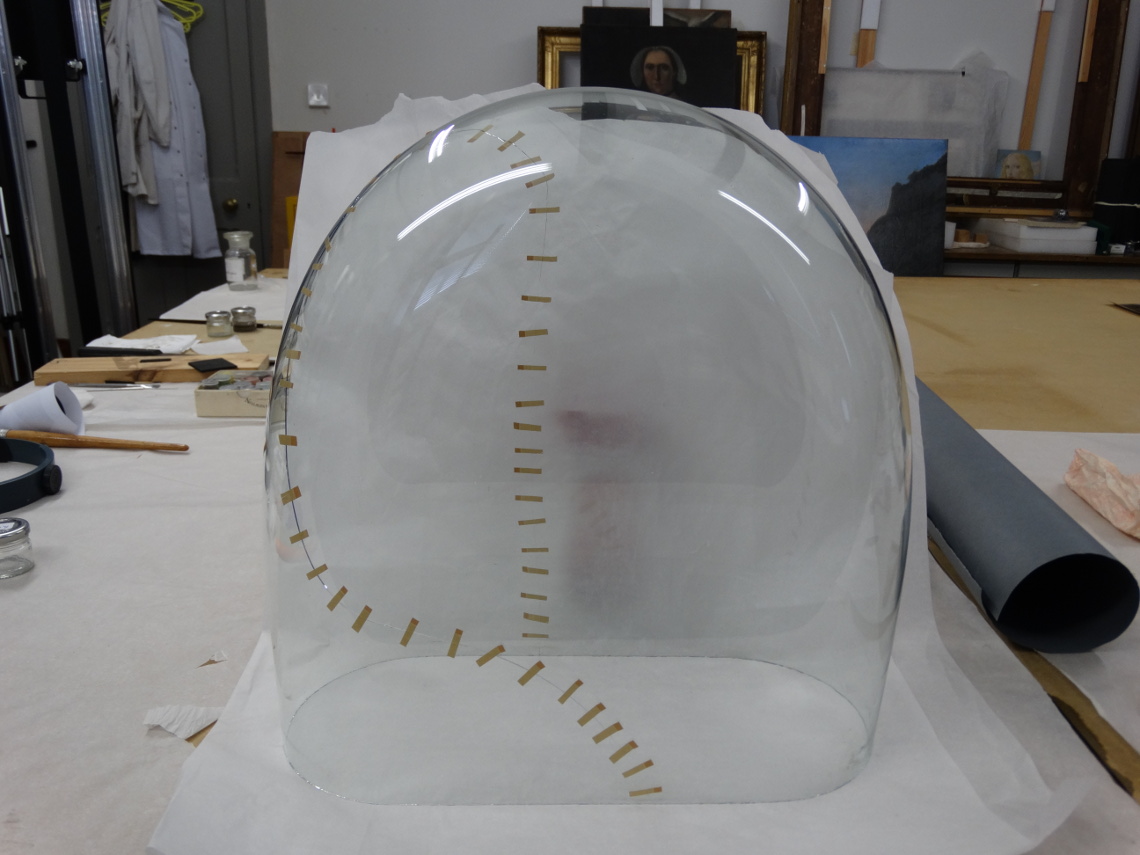 The old tape was cleaned off and the dome re-attached with a modern epoxy adhesive common in glass conservation. 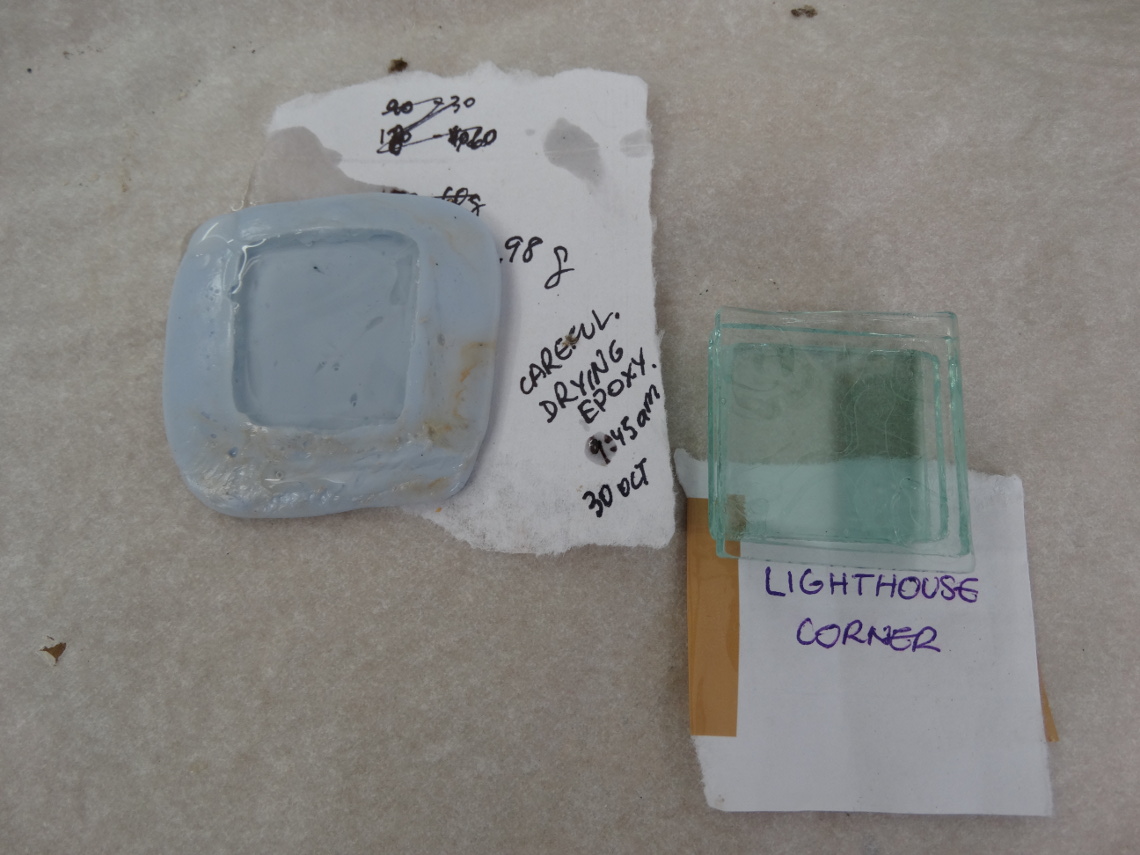 The base was cleaned and the smaller leg levelled and re-attached using a modern resin cast. 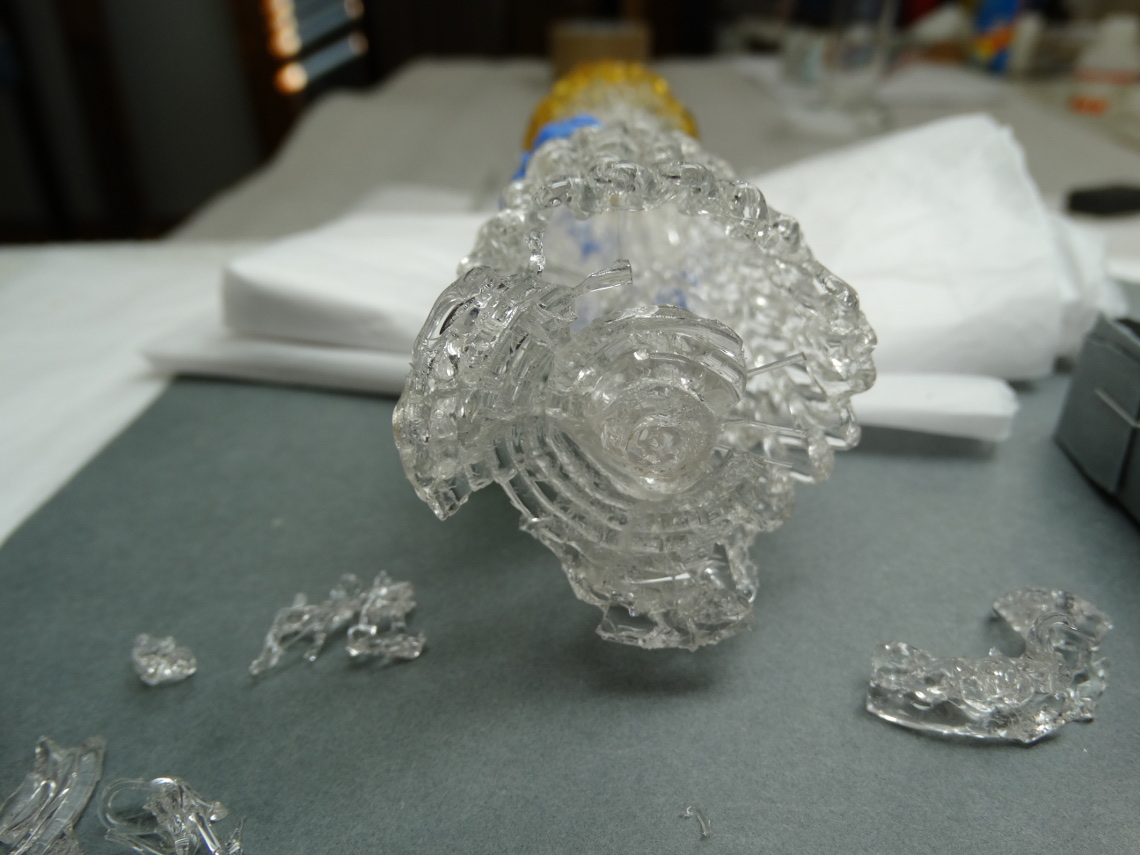 Lighthouse base disassembled and re-attached. It had apparently shattered into a LOT of tiny pieces. 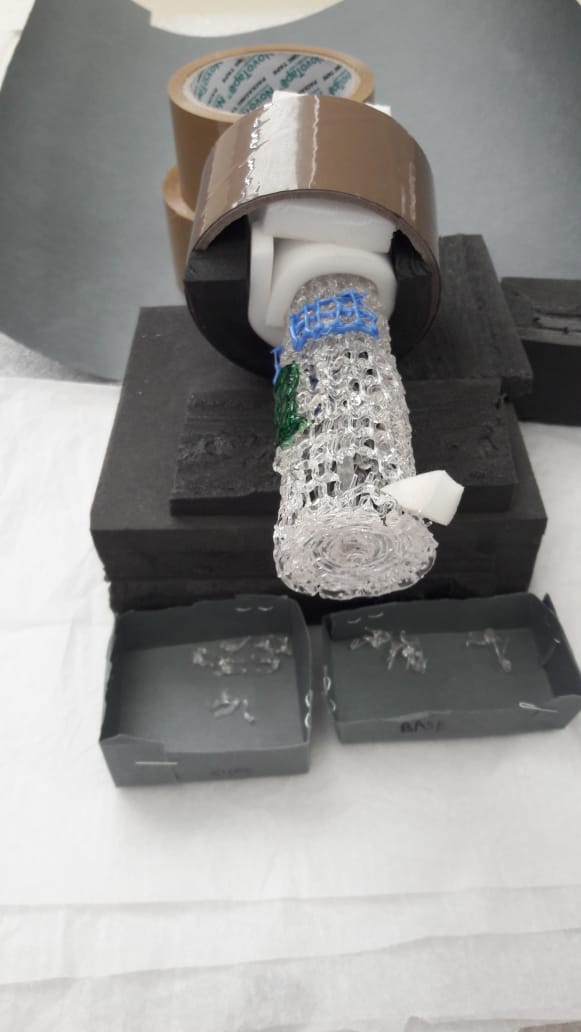 Extremely painstaking reconstruction of lighthouse base. This process alone took several weeks and endangered the possibility of finishing within the available time for the project. 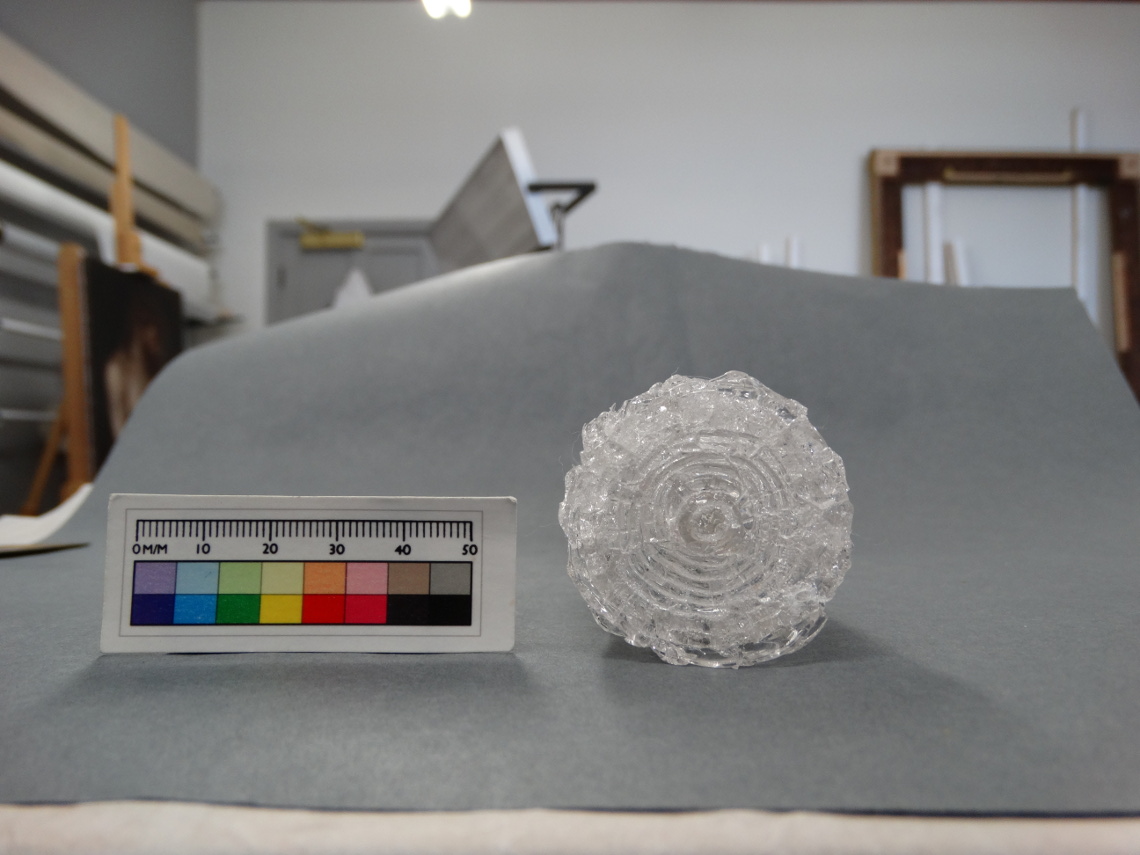 This is the only intense glass object I have worked on so far and officially one of the most nervewracking work I have ever encountered.

However, as much animal glue as possible was replaced. The lighthouse was able to stand once more and the dome no longer obscures the object within. The beautiful clarity of the glass has been restored without endangering its physical stability. 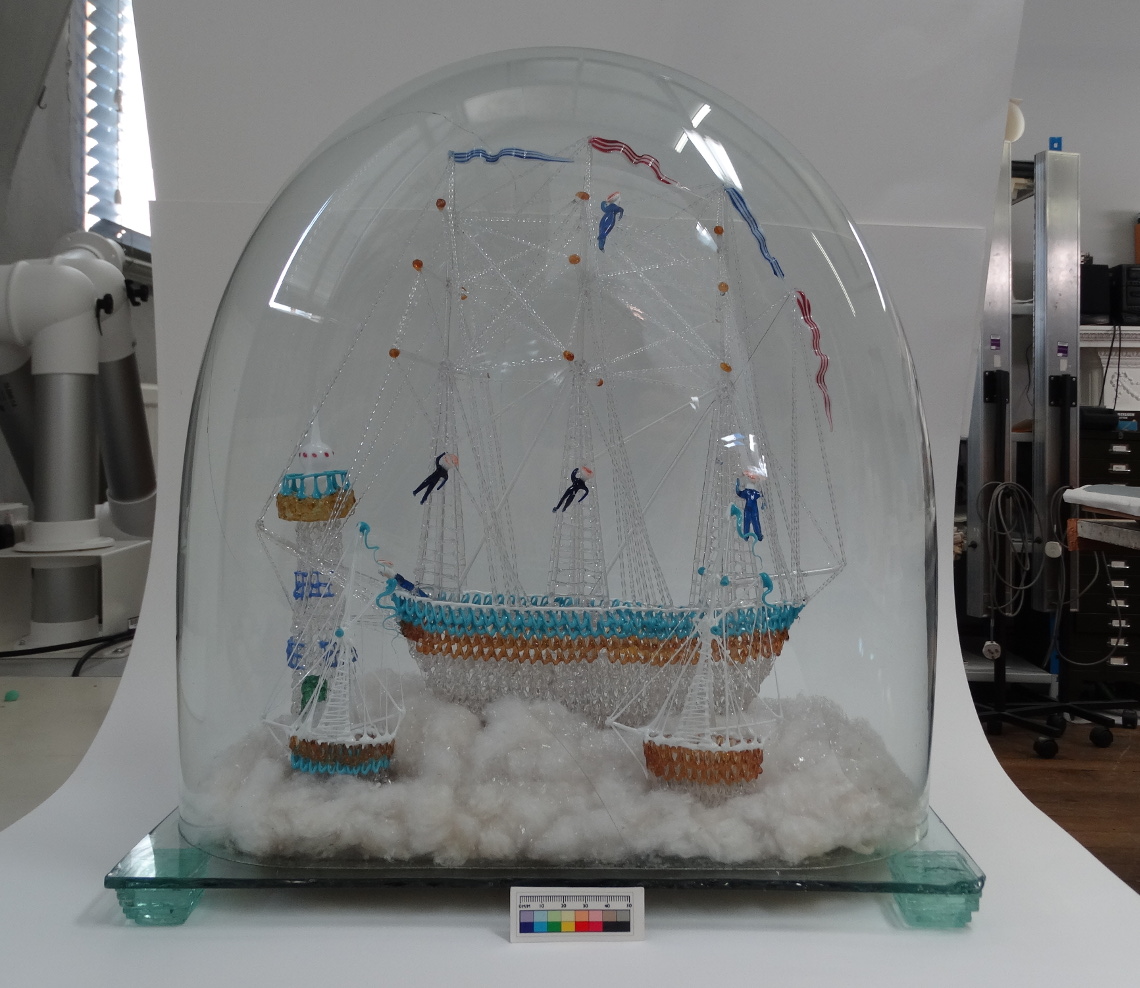 This conservation process was carried out in 2018 with the generous guidance of Jon Old, Howard Coutts and Julia Robinson (all from the Bowes Museum).