This snuff box was made of a copper alloy metal, paper, animal glue and polished stone. It had been awaiting conservation since 2006 and had suffered a fall in 2017. 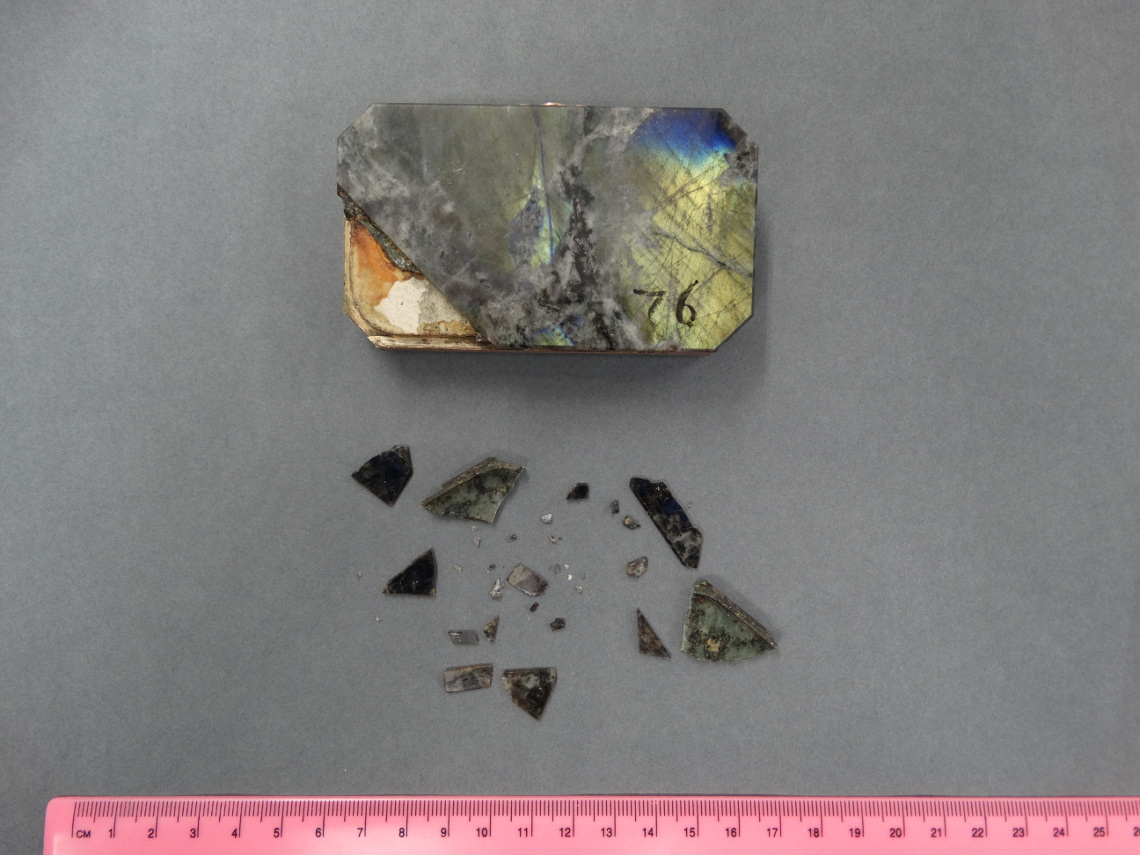 Photo of snuff box before conservation. The bottom left corner of the lid was smashed into various small pieces when the snuff box was accidentally dropped in 2017. 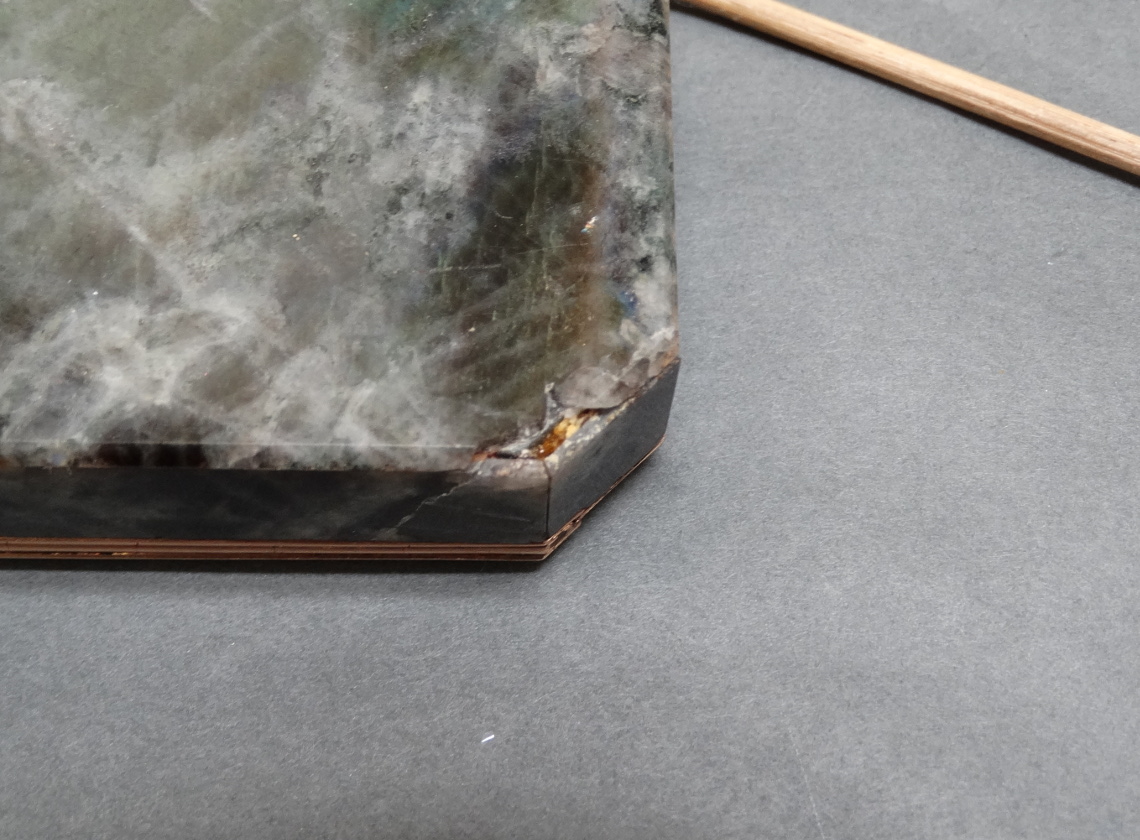 The bottom right corner of the base was also cracked with various pieces missing.

Thanks to the broken corner, it was possible to observe the construction of the lid. It showed a card base to which two layers of stone had been attached with animal glue where the top layer of stone was slightly translucent while the bottom was opaque. It was also possible to see that animal glue had originally been used in the construction of the object. Animal glue can be easily identified by its caramel colour. 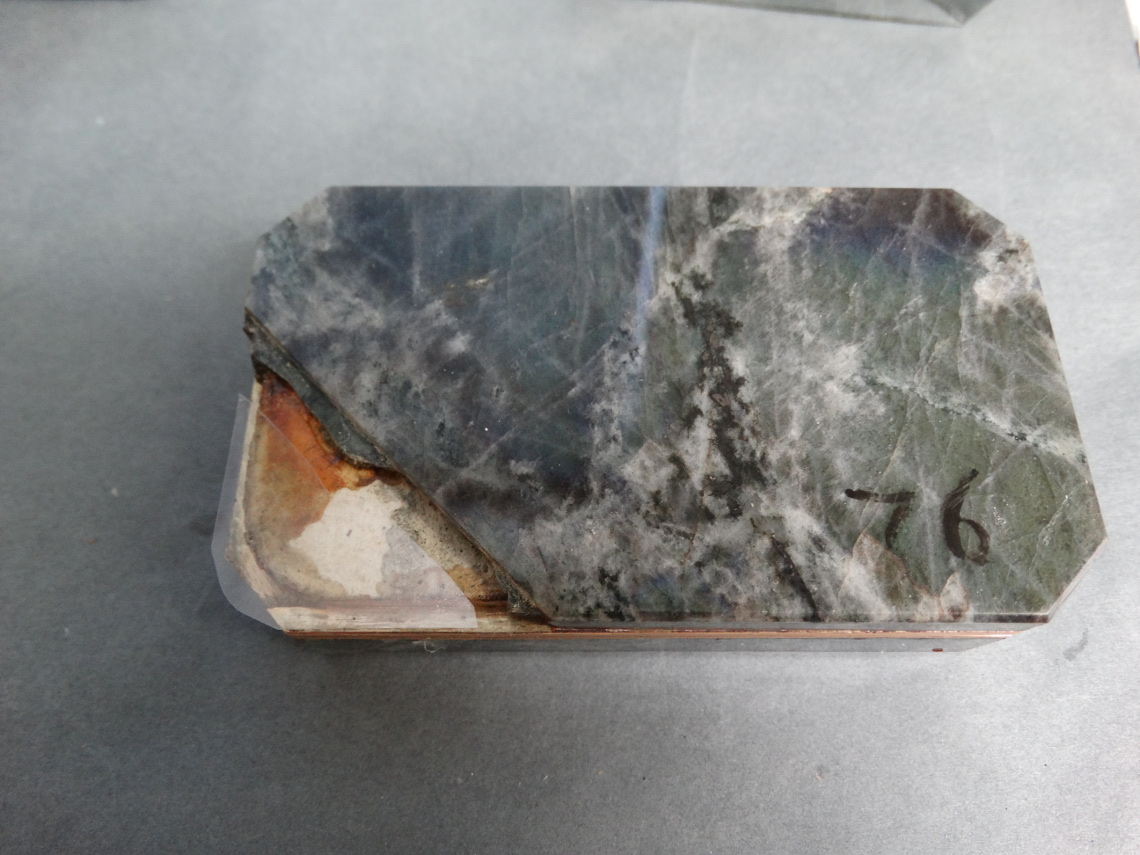 A small piece of Melinex polyester film was inserted to protect the original paper base. 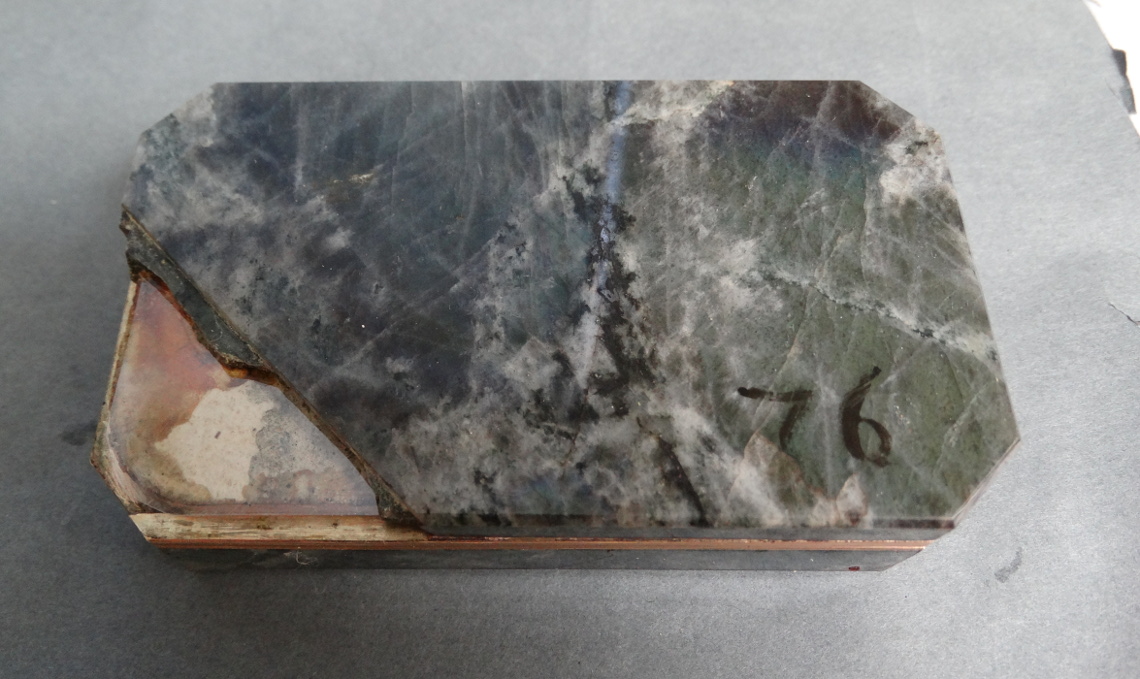 The Melinex was made to fit perfectly in the shape of the substrate. This allowed the stone layer to be attached to the metal edges but not the original paper, protecting the original material and making this intervention removable in the future should it become necessary. 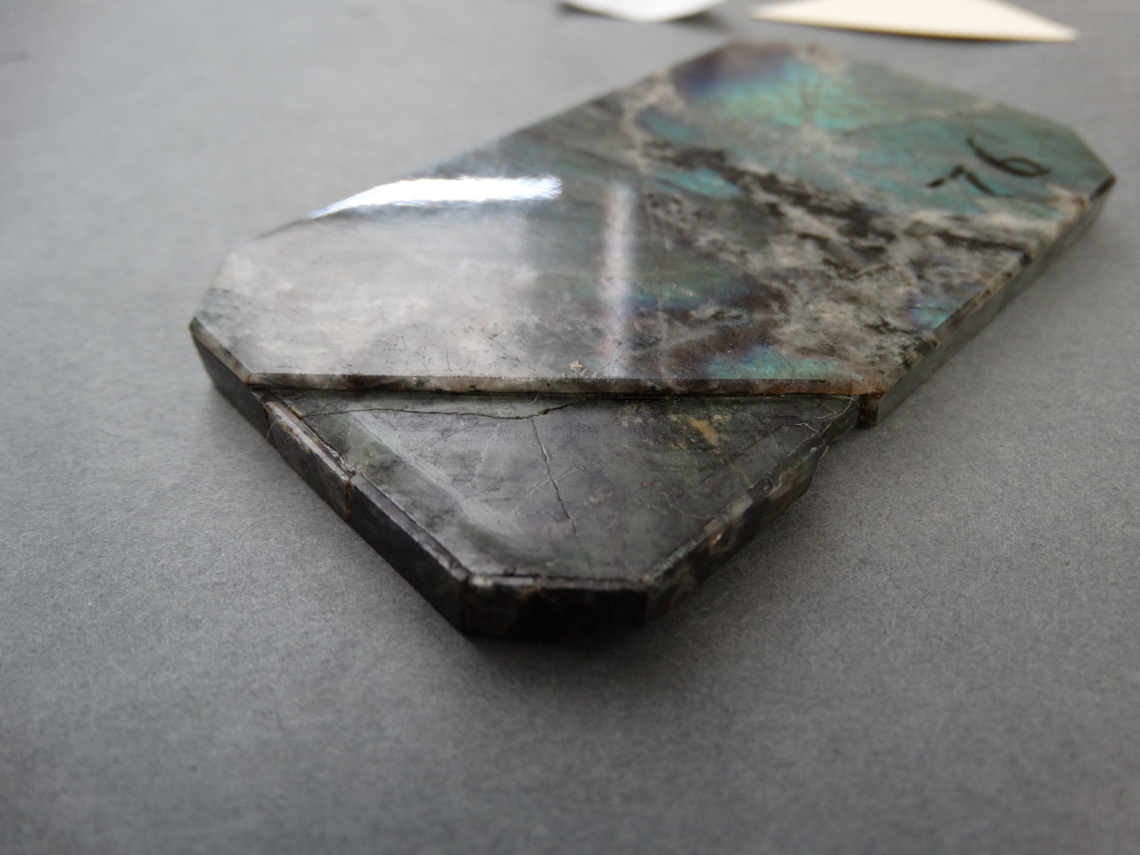 Since the second layer of stone was intended to be slightly translucent, different tests with different coloured backgrounds were tested: beige card, brass-colours, white tissue paper. This process was very important as the reconstructed corner should not clash a lot with the colouring of the rest of the box. 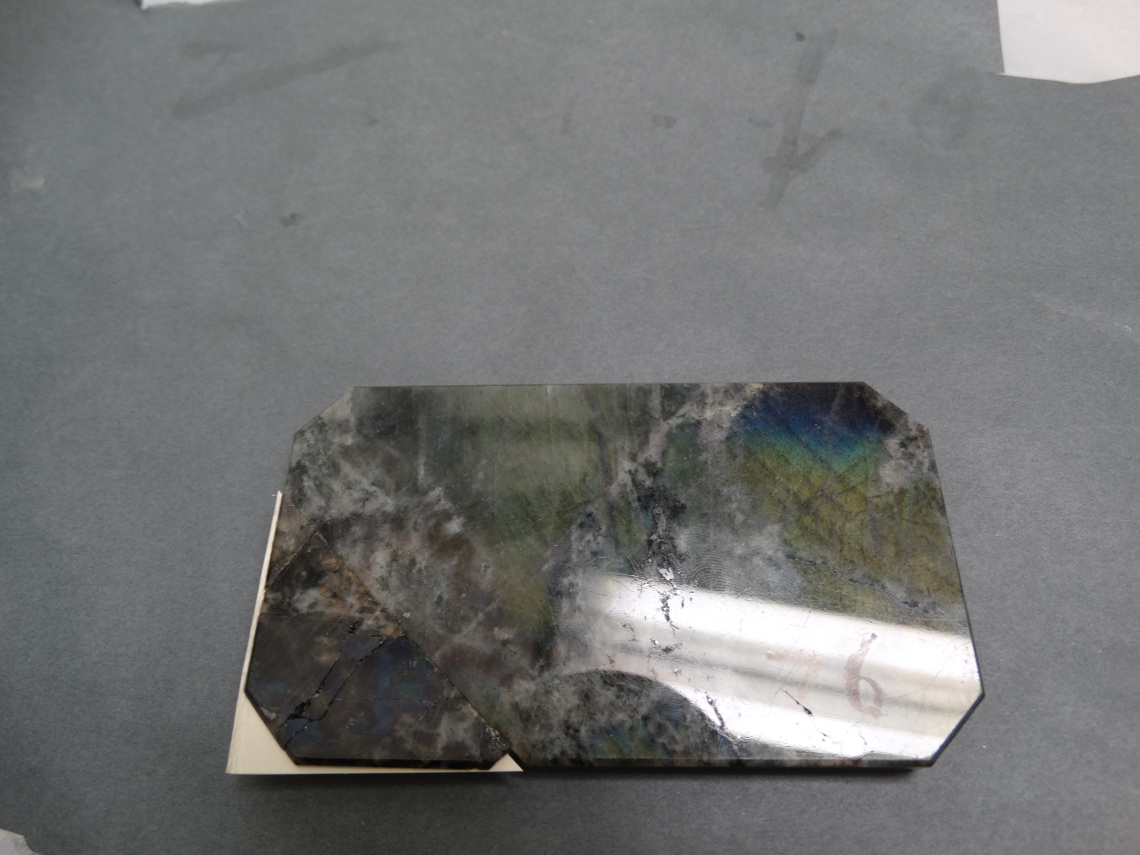 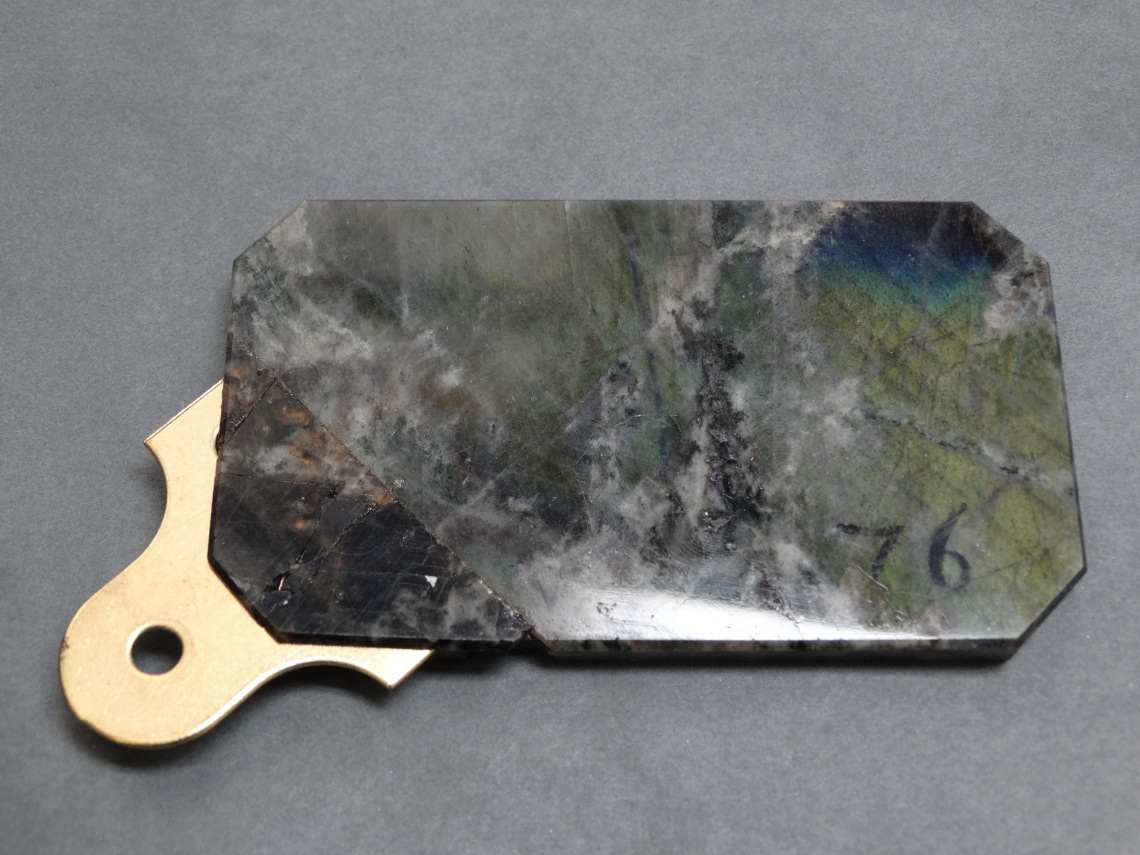 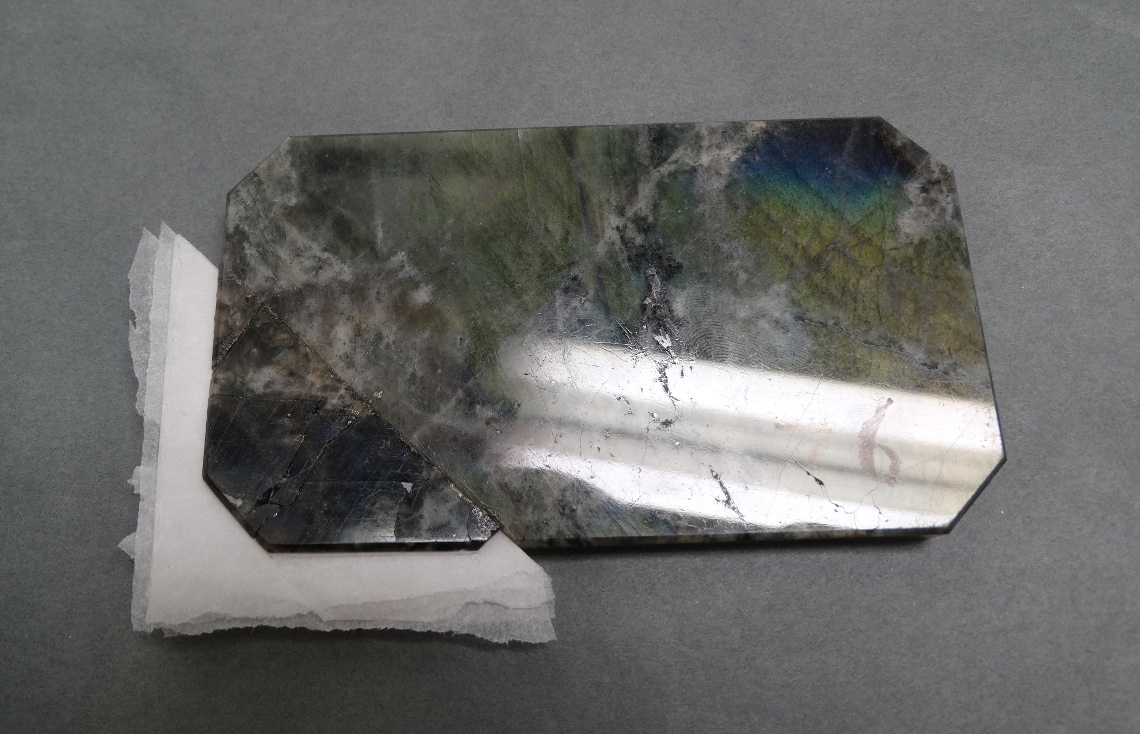 In the end, 6 layers of white, acid-free tissue paper were found to be appropriate to even out the level of the surface of the lid and also achieve the correct colour beneath the transluscent layer. 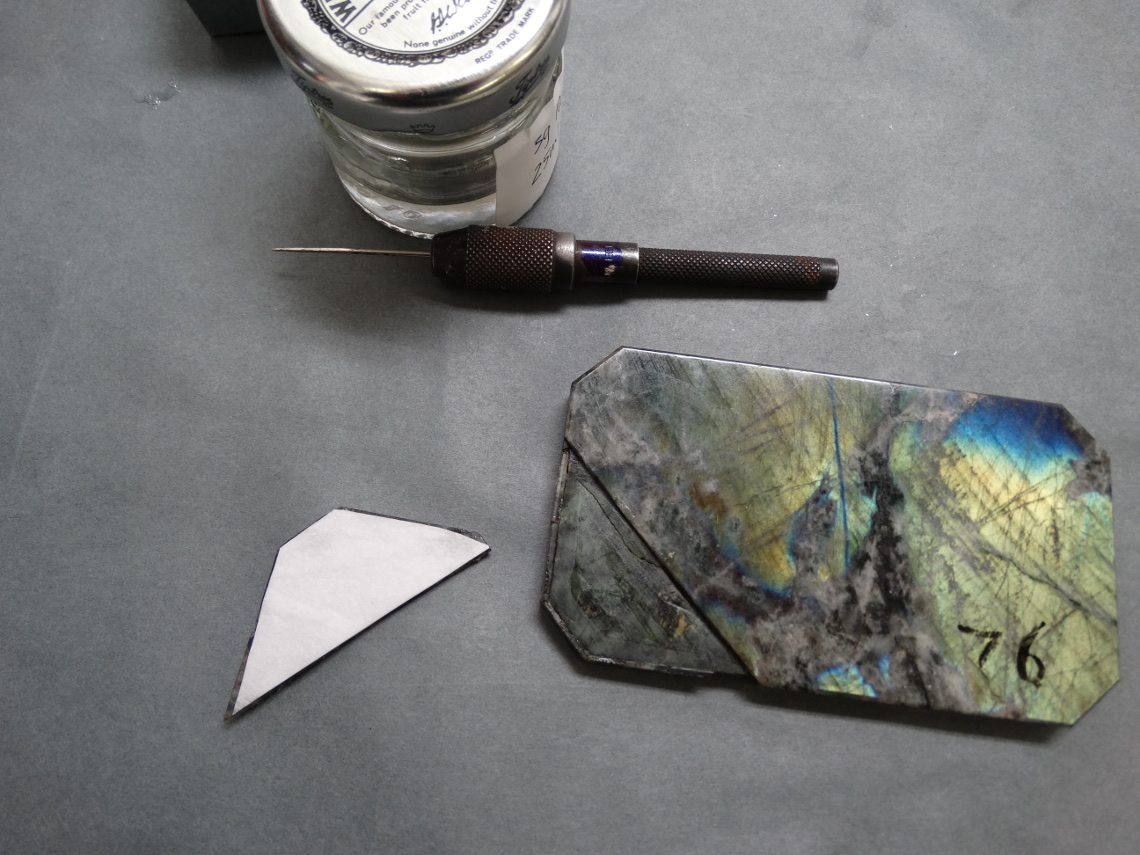 It was also necessary to protect the broken areas of stone on the base and front of the lid. Leaving exposed breakages can encourage the deposition of dust and allows for further crumbling or breakages to occur at such weak spots which can then start extending across the rest of the object. 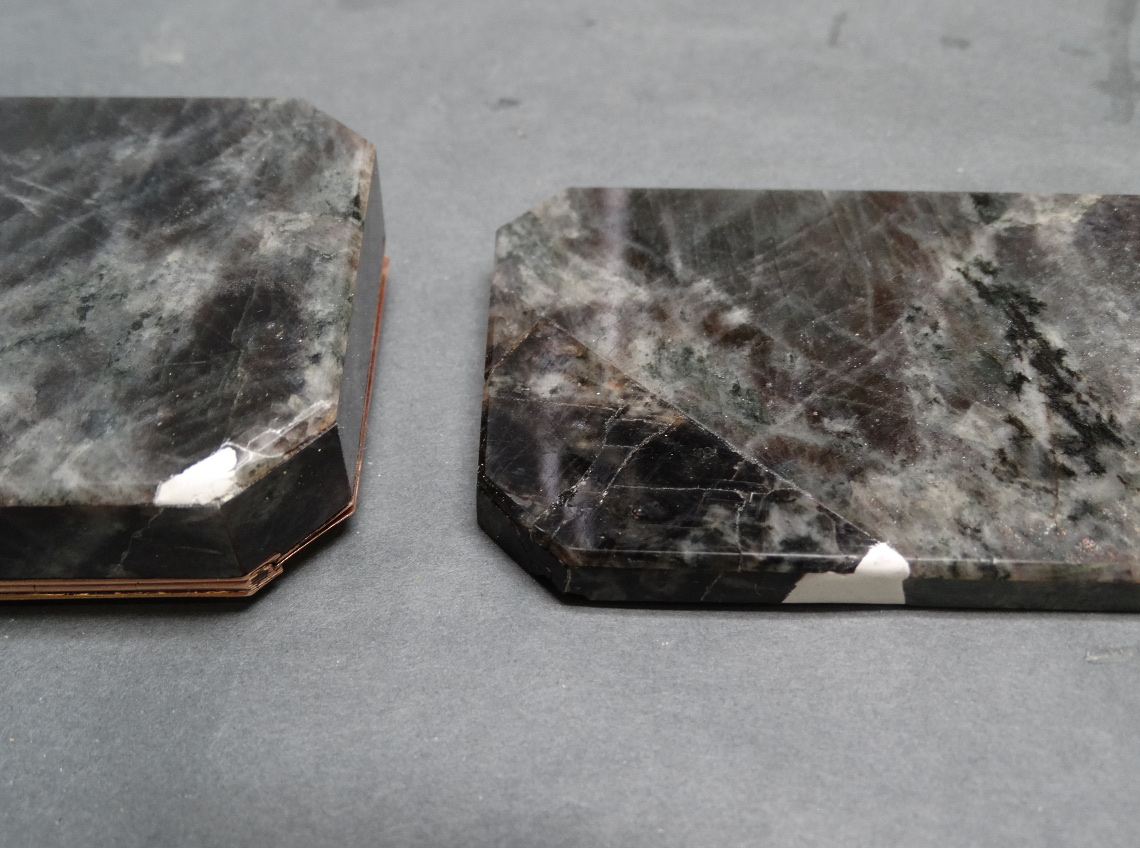 A special epoxy filler used in ceramics conservation was used to create infills for the missing broken areas. These infills were then filed down to obtain a smooth surface and painted with pigments in an ethyl-methacrylate polymer resin. 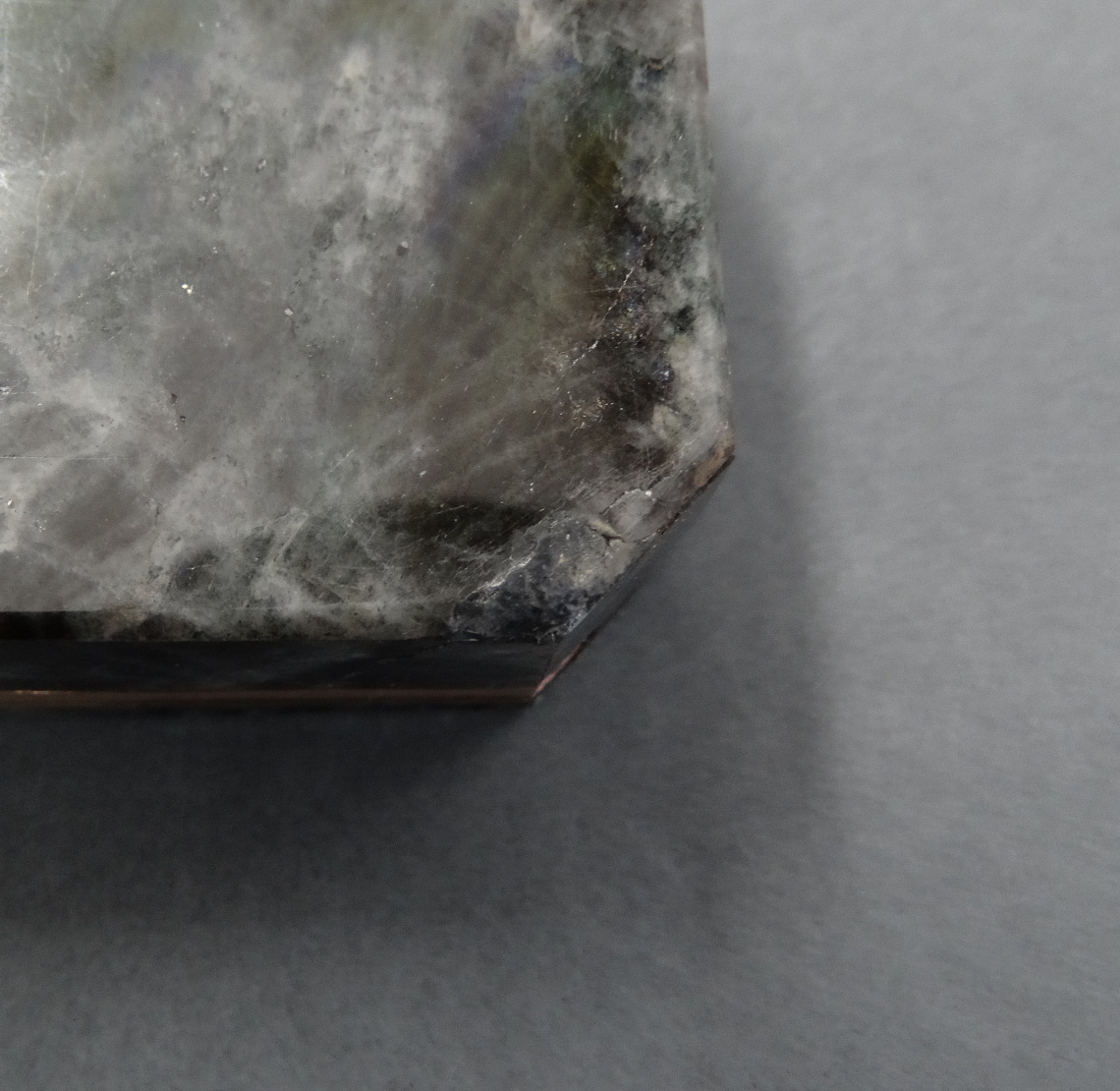 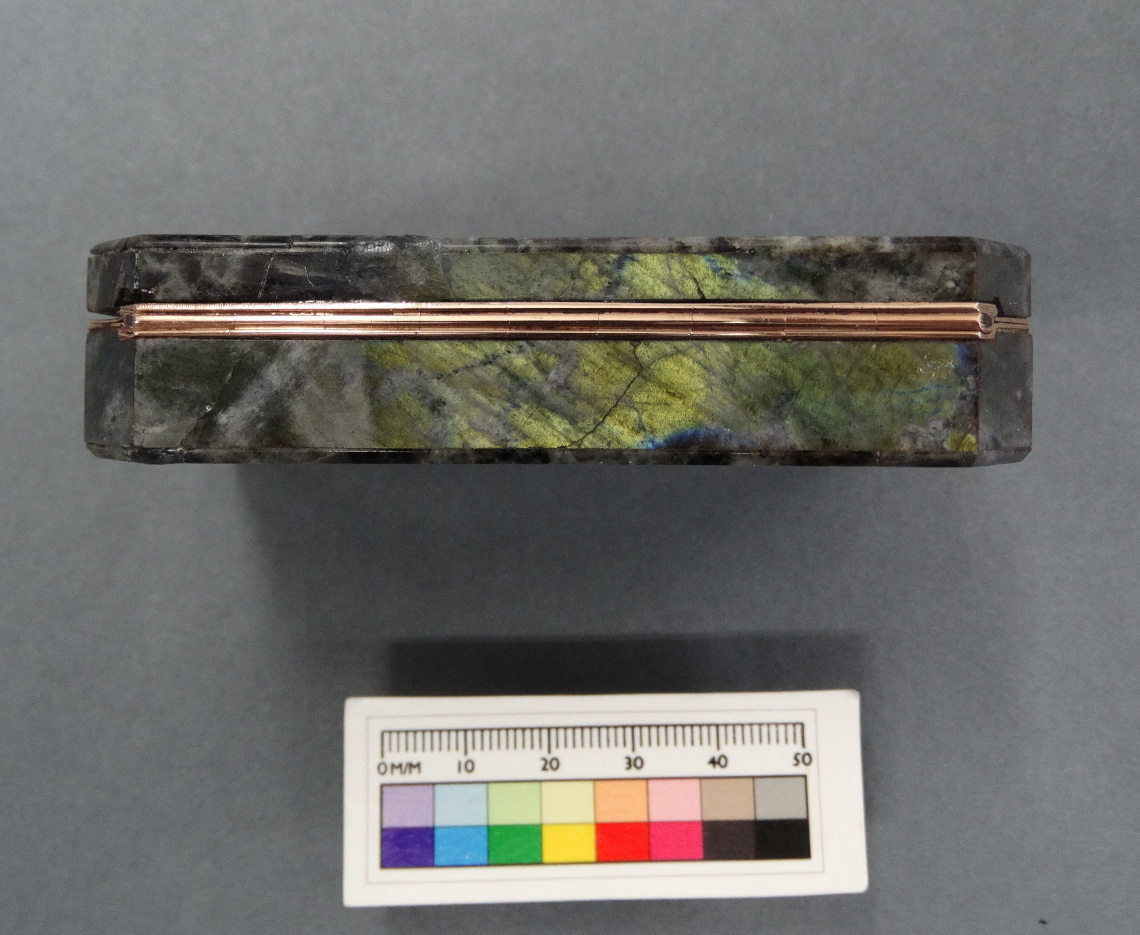 Filled-in broken edge after conservation. Can you find where it is? 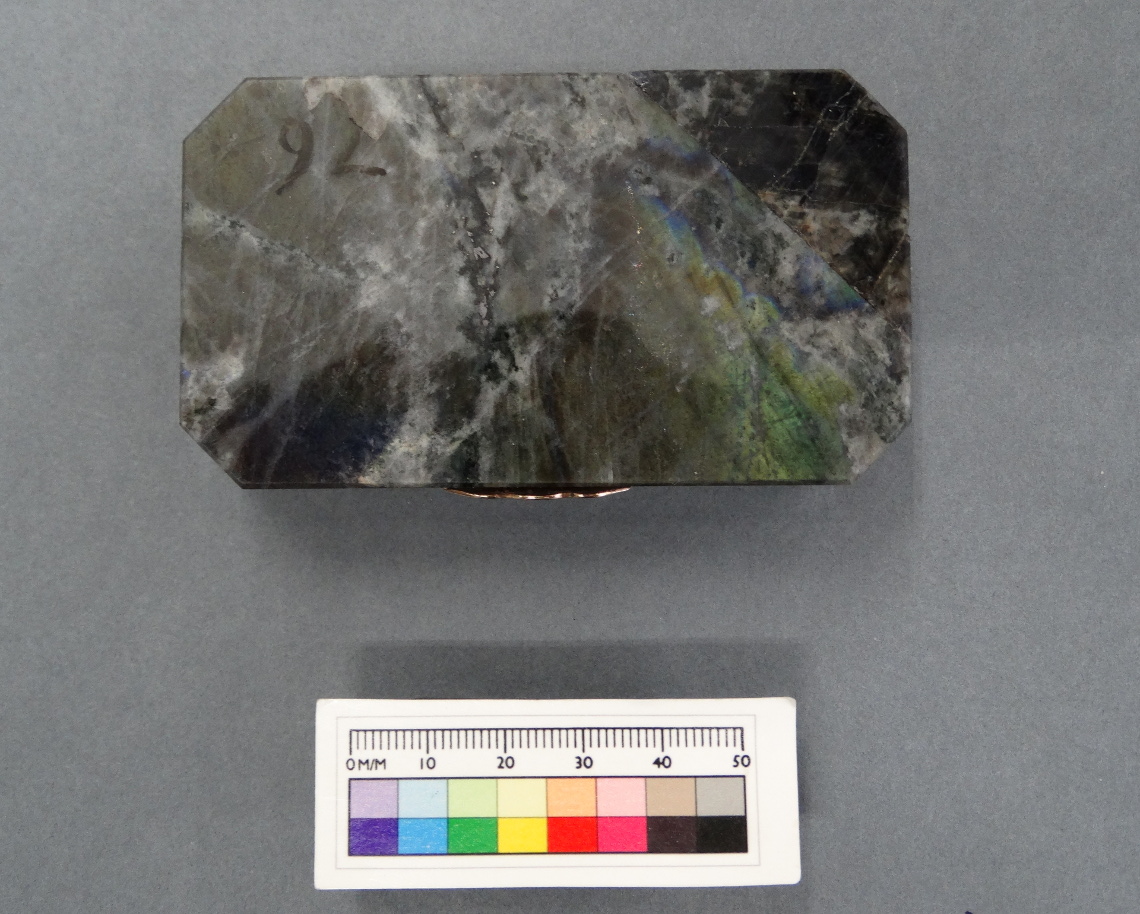 This conservation process was carried out in 2018 with the generous support of the conservation staff at the Bowes Museum.