This is a painted figure of Maitreya, the future Buddha. It's made up of a textile base and covered in unbaked clay. The image was painted and gilded in some areas. The Maitreya Budda is recognised by his "western" sitting posistion (on a throne) instead of cross-legged on the floor, and by the position of his hands in the Dharmacakramudrâ as he teaches the Dharma. 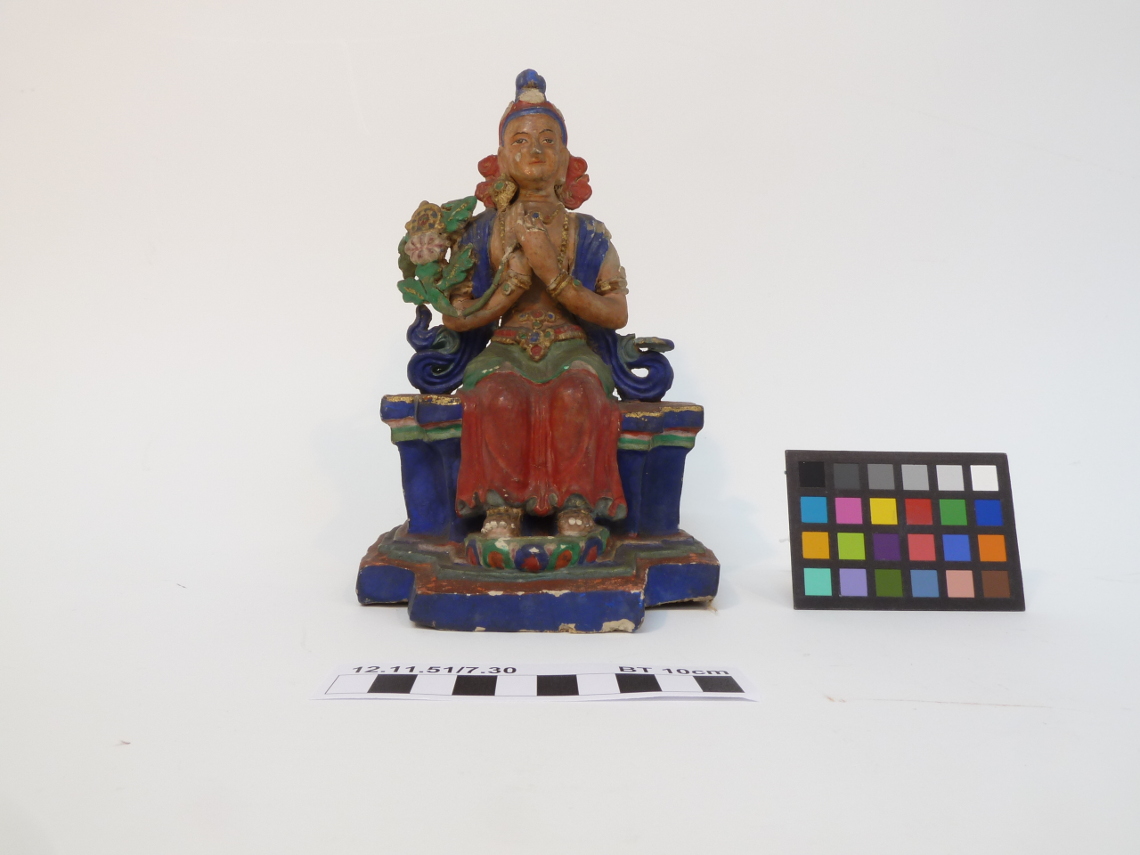 Photo of the sculpture before conservation.

Some figure ornaments had been completely lost. 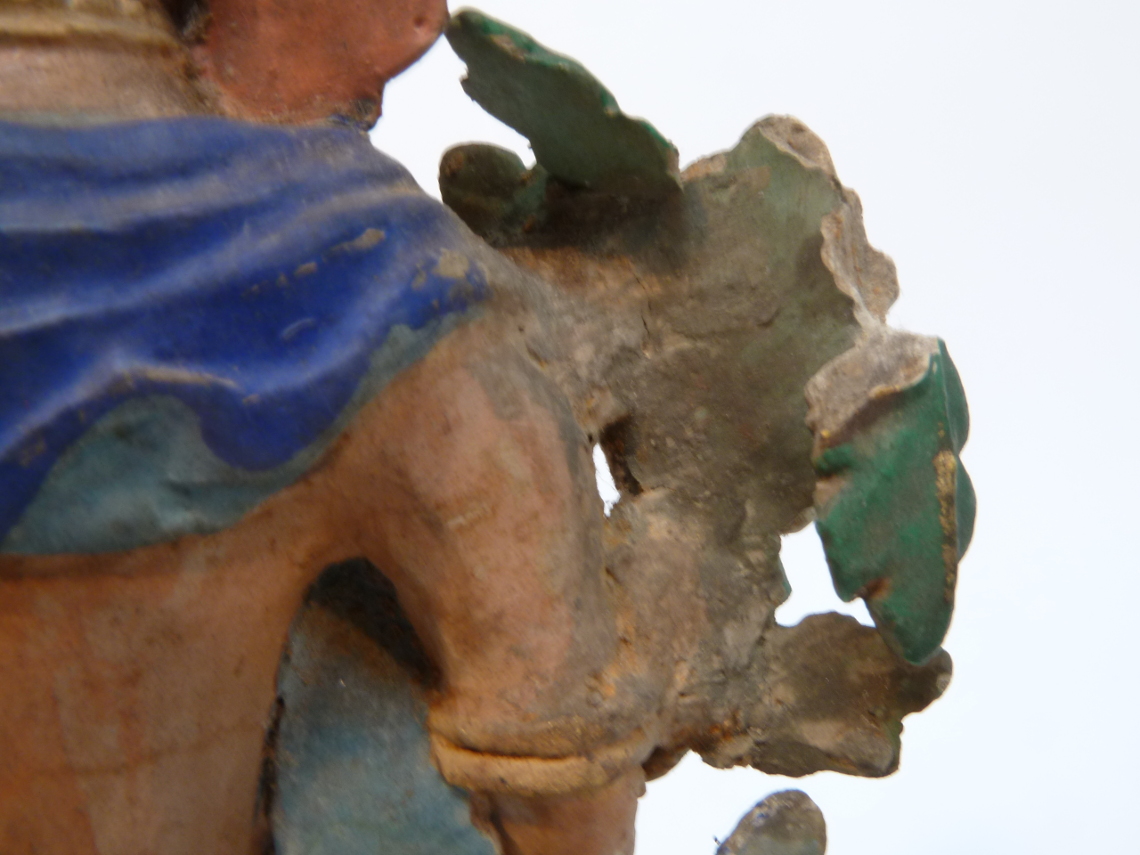 Other ornaments were broken and hanging dangerously loose. 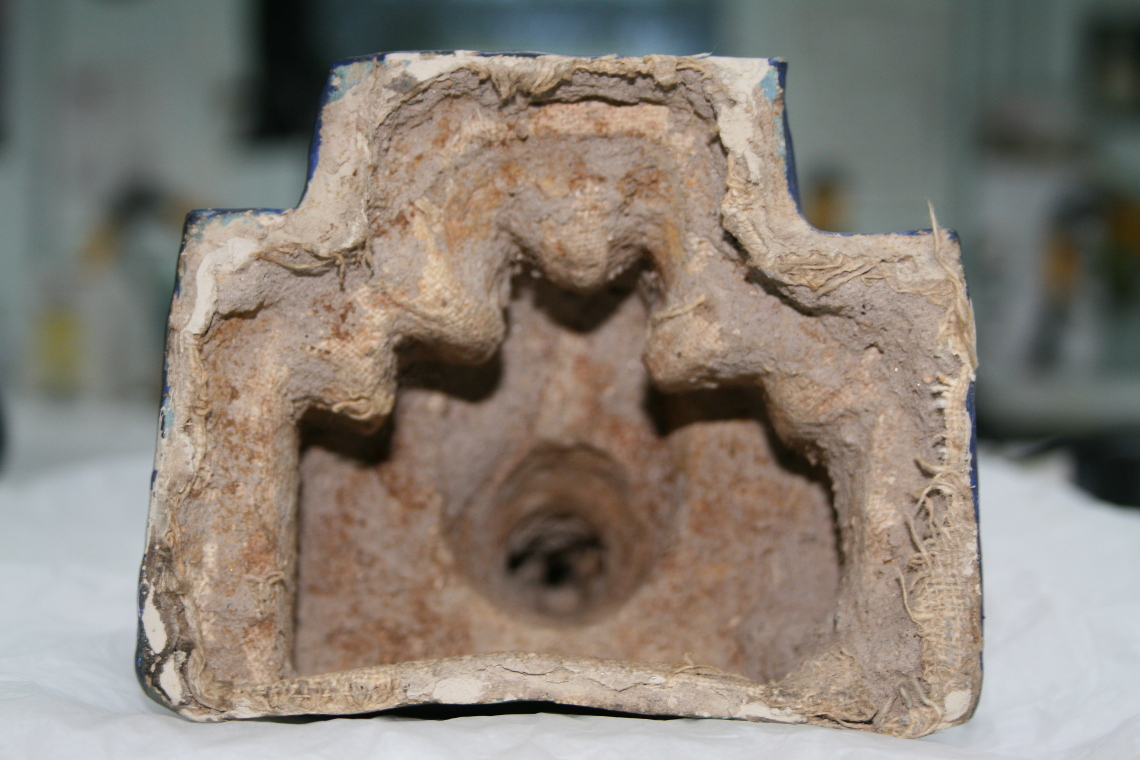 The base was somewhat misshapen, creating cracks in its back wall. Note the curvature at the bottom.

At some point, this sculpture would have been filled with special prayers and sealed at the base, constituting a sacred, ritualised image. However, at some point in the past, it was open to obtain the prayers, and the figure lost its ritual use.

In spite of this "desecration", as it is a representation of the Buddha, believers consider it a part of the Buddha's body, which must be treated with the appropriate respect. I was lucky enough to be able to talk with Lama Zangmo in London and ask for her thoughts and opinions on object treatment before any conservation and restoration took place.

Conservation was divided into three steps: 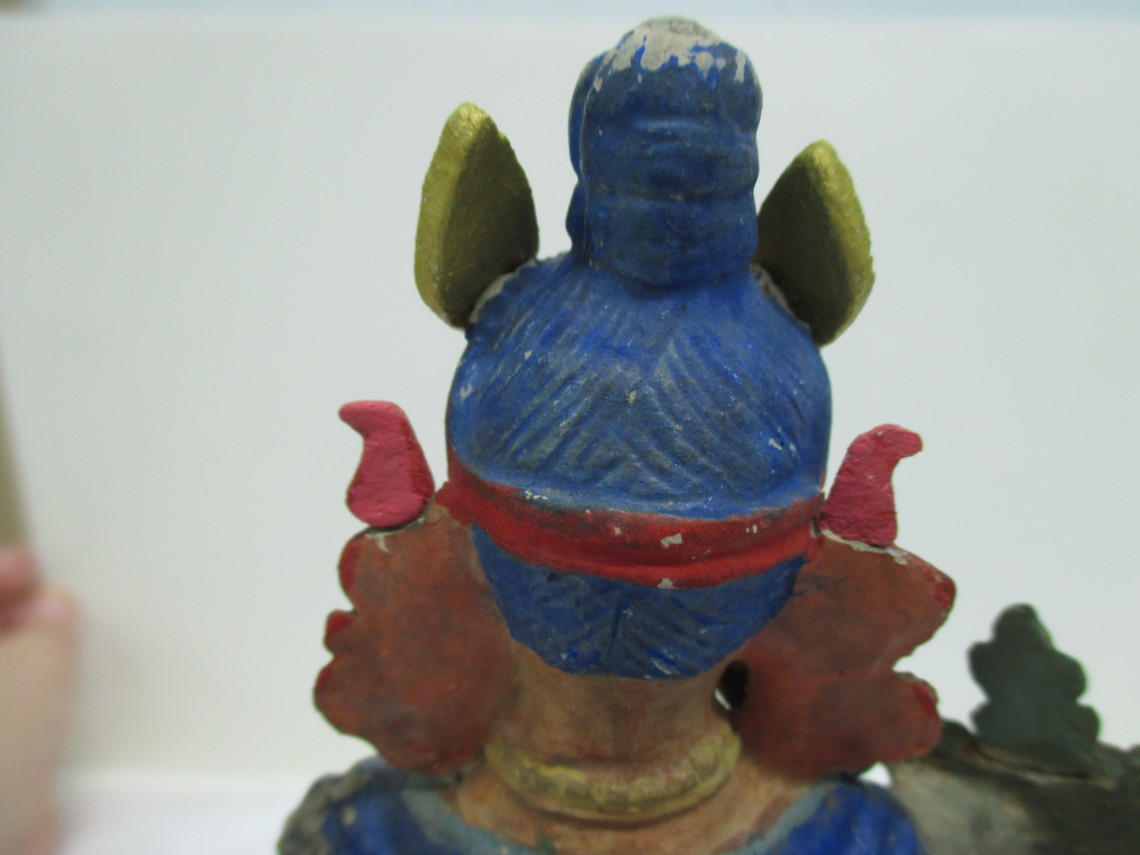 Back of Maitreya's head after conservation. The added ornaments are superficially attached for easy removal and coloured according to exhibition lighting (as opposed to laboratory white light). 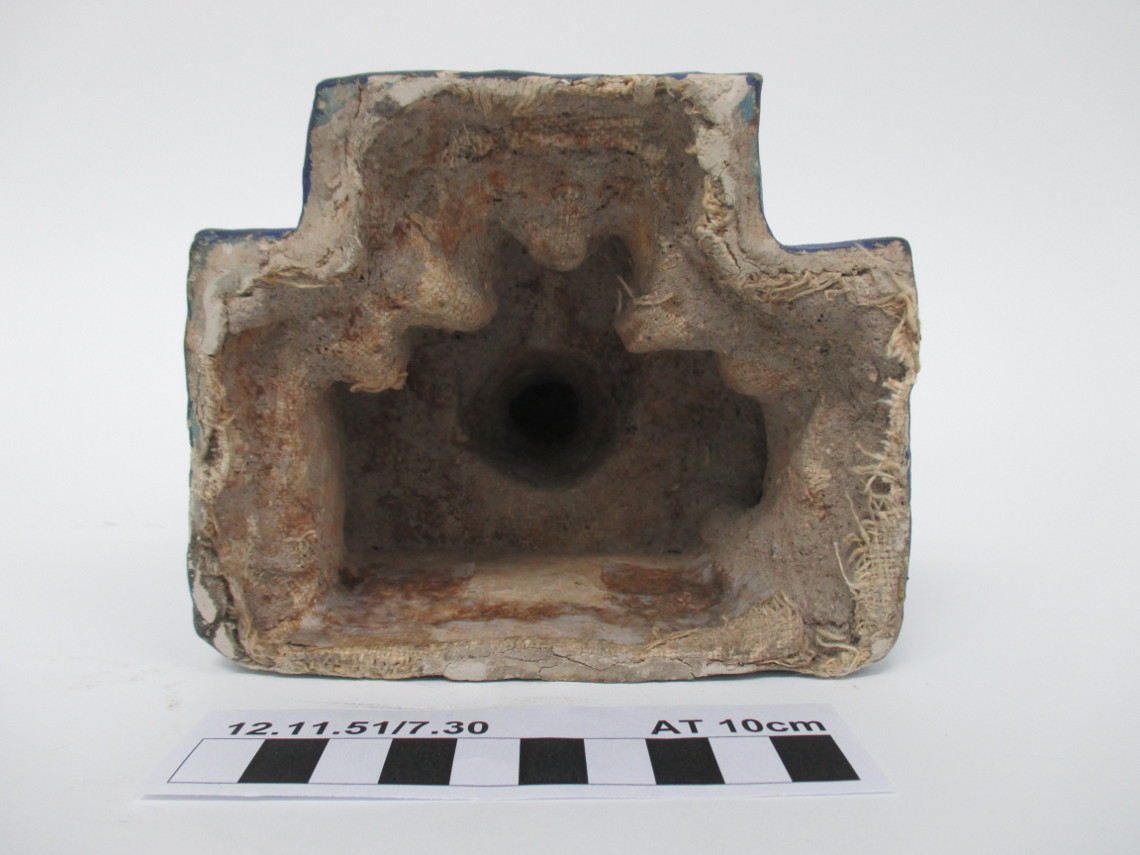 Straightened, strengthened base after conservation. Curvature is gone. 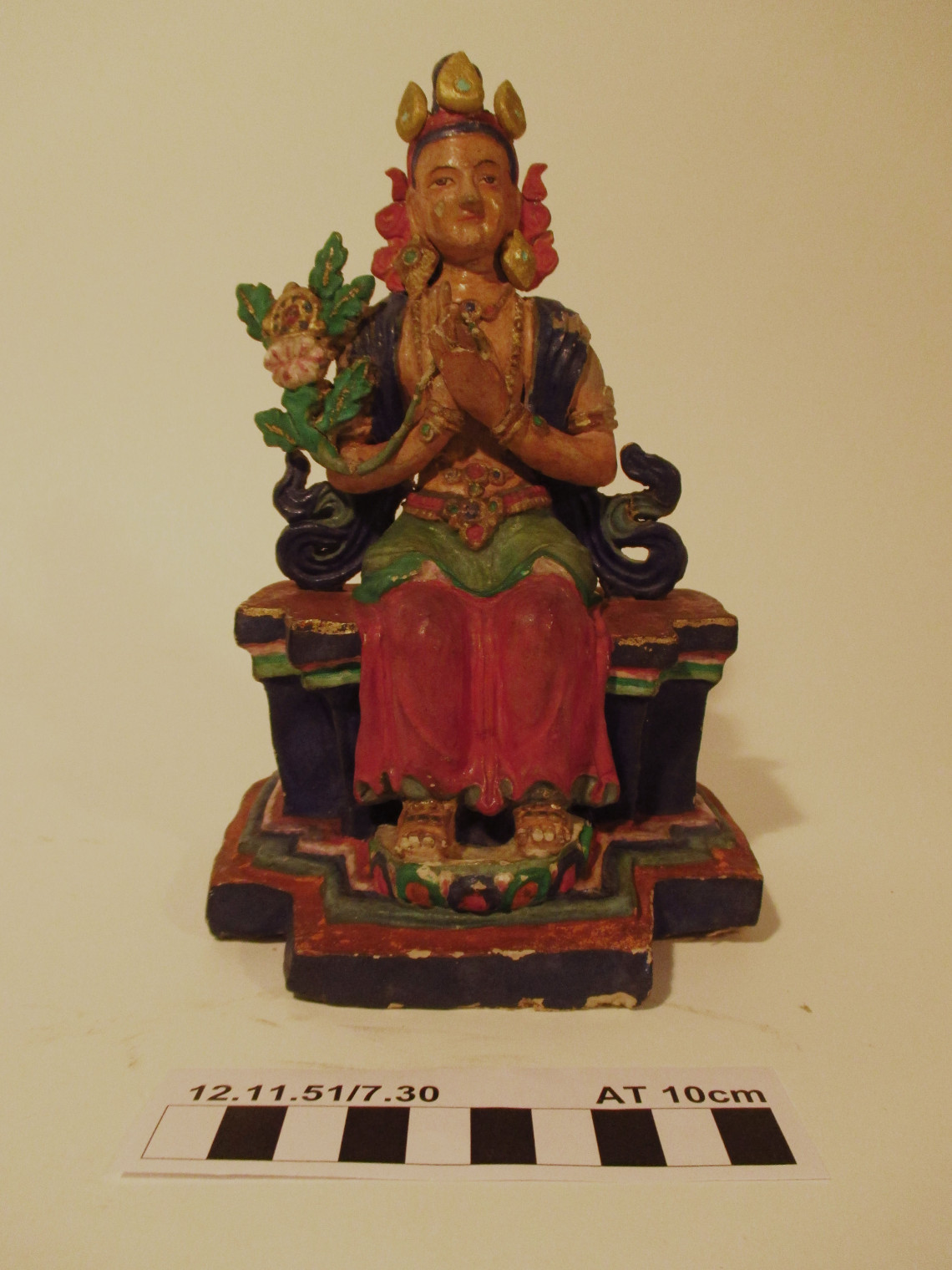 Figure under low-level lighting. This figure was intended for a temporary exhibition, so the reduced lighting allowed for more minimal interventions. 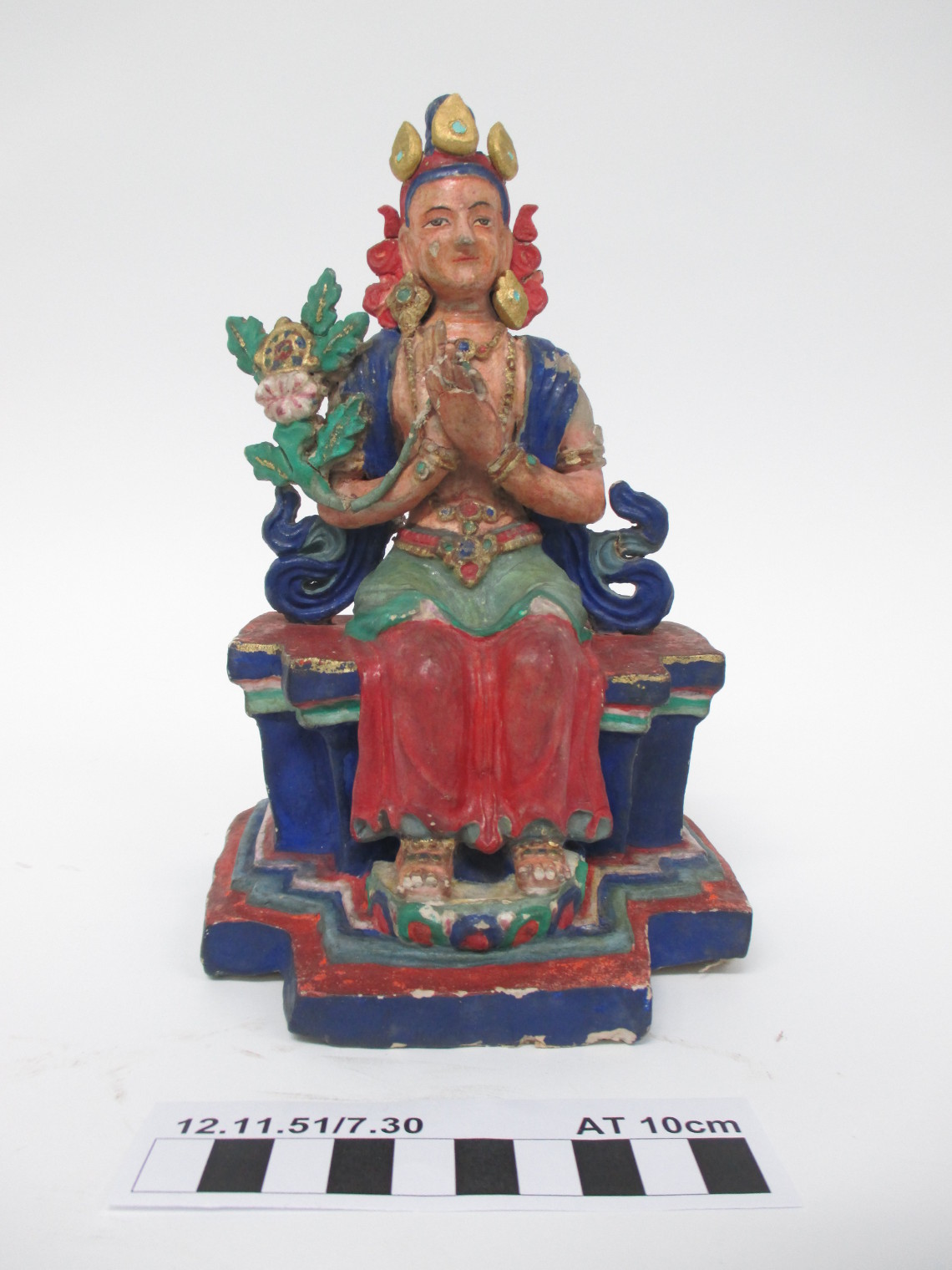 This conservation process was carried out in 2013-2014 with the generous guidance of the staff at the Horniman Museum and Gardens, in London. I would also like to thank Lama Zangmo (Kagyu Samye Dzong London), Mr. Phuntsog Wangyal (Tibetan Foundation) and Mr. Tom Crowley (The Horniman Museum) for their invaluable guidance during this project.